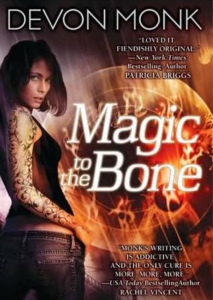 Magic To The Bone by Devon Monk

Allie would rather moonlight as a Hound than accept the family fortune – and the strings that come with it. All magic use has costs — hers include migraines and memory loss. She finds a boy dying from a magic Offload with her father’s signature, then her father is murdered. Allie’s search for the truth calls on her country friend and the handsome man originally assigned as her bodyguard. Someone is forging magic signatures — and hers is on her dead father.

Urban fantasy is one of my preferred genres to read, mainly because my favorite author writes within this genre, but I have been challenging myself to read other authors that write urban fantasy, which is where the Allie Beckstrom series from Devon Monk falls. After reading the synopsis, I was very excited to read this book and in fact, there was a waiting list at the library for it, so when it was my turn, I started it right away. The overall story arch of our heroine, Allie Beckstrom, choosing a life on the periphery in contrast to the fortune she could have working with her estranged father in the business of magic, is an interesting arc, even if it is typical. Despite the less than creative foundation, the character of Allie still captured my interest, reminding me somewhat of Jessica Jones, however as I continued to read, I developed a love/hate relationship with the story.

My first issue was that many characters were introduced rapidly at the start without time for natural development of their relationship with our main character. In my opinion, this seems to be a problem for many authors of book series. All the main characters are jammed into the first book, instead of letting them flow in and out of the story as the series develops.

The second issue I had with the story was the multiple and excessive sex scenes, many of which had nothing to do with furthering the development of the story. I am not afraid to say that I do self-censor what I read and what I watch, I intentionally chose not to read books that are only written for the graphic content. However, when intimacy between characters is necessary for the plot, I have no disagreement with that. For example, I read a Nora Roberts trilogy, The Cousins O’Dwyer, every year and enjoy the development of intimacy between the main characters, as it enhances and furthers the plot. This is not the case with Magic To The Bone. The only scene that I felt truly enhanced the story, without spoilers, was when the intimacy also explored the depths of magical potential, the rest were just page fillers.

Despite my issues with the story, I did really like the main character, Allie. She is spunky, strong, independent, and damaged enough to not be cocky. Although I was disappointed with the events during the resolution, the story kept my attention and I really want to see what happens in the next book. My hope is that as the author spends time with the story and characters, the storytelling becomes more polished and mature. This book really gave me a struggle when it came to rating it, ultimately I went with a 3/5, mainly because I liked it enough that I plan on reading the second book in the series.

View all my reviews

Thanks for taking the time to read my review; if you like you can follow my reading activity on Goodreads here.